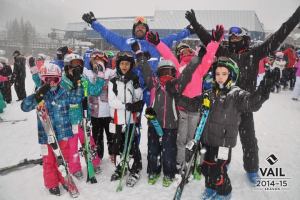 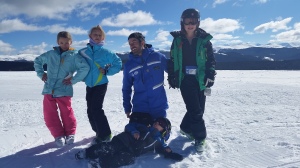 They say teaching skiing to kids is the best form of birth control… not for me, it didn’t scare me out of having kids of my own someday (although maybe one or two sound better than three now).  I had a great time teaching skiing to kids! It’s kinda hard to pinpoint why, but I think one big thing were the quick but sincere bonds I made every day. I’m not the funniest or most clever instructor, but I gave the kids freedom to act as long as their actions didn’t harm others fun (like I treat other adults, but with more fun, imagination, and nonsense), and I think in return I got their respect, their commitment to follow my advice, and it made it more fun, which produced very satisfied customers.

Of course “kids say (and do) the darnest things”, and that makes for great comedy.  My favorite story is when a 7yo silently took my friend Jeff’s pole and threw it out the gondola window into The Narrows (a double black diamond trail).  I had a 9yo that was so good with accents, her favorite thing was to ride on chairlifts with strangers and try to convince them she was from Georgia or Australia.

7 yr old kid: leo dicaprio is in it

The answer we were looking for was Titanic

I had a 10 year old who wouldn’t stop asking questions and was driving me crazy, so I gave him a 10 question max during the day, I thougt I was so damn clever, until 5 minutes later I realized the kid was crying because I didn’t limit everyone else… “please stop crying! I’ll give you unlimited questions” problem solved, kid stopped crying… and I spent the rest of the day answering the stupidest fucking questions you could imagine, including “Am I annoying you?” “Can we go down a black diamond” and “what time is it?” for a hundred times. 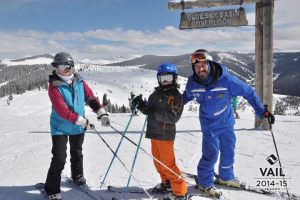 I learned a ton from those kids and from Vail, stuff I want to master and apply in many real-life situations:

So how does Vail get around these special challenges? They make sure they hire people that are overqualified in learning quickly and understanding high end customer service. Vail does get a break, though, in that most ski instructors and supervisors are OK with earning a lot less at this job (than their next best alternative) because it’s so fucking cool.

Change it up. When teaching or training, if your traditional method isn’t working, CHANGE IT UP, change SOMETHING, change ANYTHING, but don’t just keep doing the same forever until it works. Some kids would be terrible at flat ground exercises and stopping, but would skip those and excel at the more complex turning and skidding drills, and I wouldn’t know until I tried it.

There’s gotta be something good about it because as my final days on the mountain wound down, I got this melancholic feeling in my head, and I’m sure it wasn’t just the hangover from another night of drinking craft beers from Edwards’ Crazy Mountain Brewery, or Eagle’s Bonfire Brewing Co, or (my favorite) Fort Collin’s New Belgium Brewery.

What’s the biggest difference between being in Vail and my “old life”?

I’m tempted to say it’s the bubble of security and happiness (everyone just seems to be in a good mood in Vail, and most of those who weren’t, left halfway through the season), but it’s not; the biggest difference is in the POED (Percentage Of Epic Days). As a businessman in Guatemala I’d get 2-3 epic days a month, but Vail offered at least 2-3 epic days per WEEK. There were too many to name here, so go to my FB page to get a feel for what I mean (skiing, working, powder days, partying, ski racing, concerts, après drinks, cookouts at my place, cookouts with the Argies!, golf, snowboarding, working with great kids and families). 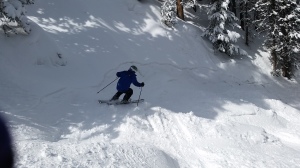 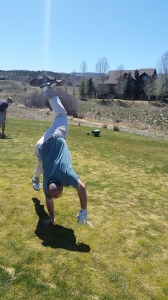 (selfie with mariachi chairlift in the background)

OK, just one! on a powder day, ski hard with my friend Bruno and his brother, grill hot dogs at Blue Sky Basin for lunch, then keep skiing until 3:30pm, head to Chair 3 and hike for 10 minutes over Game Creek, then ski out of bounds on untouched powder down to a town called Minturn. Walk a few steps with skis on your shoulder to the Minturn Saloon for margaritas and southwestern food. What a day!

But what made it so special? was it the nightlife?

No. The ratio in Vail is so bad, it even freaks out the girls… one girl friend of ours accurately compared going to bars in Vail to being “a wounded gazelle surrounded by lions”. So, maybe I went out a lot, maybe too much, and we definitely have great stories and had great bonding with friends in these underground spots (literally underground, locals rarely party in “above ground bars” those are reserved for tourists that pay $12 for a drink). But definitely, very definitely, the nightlife is not what made this special.

I thought I’d come here and have all this time left over for reading, writing, researching, working out, partying… but I found out quickly that being a ski instructor is a real job that takes physical and mental energy, responsibility, and even carries some stress.  Just imagine being in charge of 11 9 year-olds, in a snowstorm, in the biggest ski resort in the US; half the time you’re worried you’re gonna lose a kid, the other half you’re worried about them getting hurt.

NOTE: there’s so much on teaching kids and the lessons I learned, that I decided to do a separate post on that, coming soon.

I think this is the biggest reason some people become instructors for life, my friend Mark quit his successful engineering job in construction projects two years ago and told me “I will never go back to working indoors, unless a physical or financial situation comes up that forces me to” (most on-mountain jobs, including ski instructing, pay poorly, and getting injured on the job, training, or free skiing are very real risks). By being out on the mountain, I definitely felt a strong, beautiful feeling of freedom, something I think is pretty universal and should be sought by all humans.  I’ve felt it in my expeditions in Guatemala and abroad, and is something I believe so much in that I invested in Green Rush.

The manual labor aspect was interesting, it gave me an immediate feeling of productivity and service. When my job required me to be a server for my kids at lunch and cocoa breaks, I couldn’t help but compare myself to Dagny Taggart in Atlas Shrugged, earning her living by cooking and housekeeping for XYZ XYZ (read the book!)… what can I say, I might be a romantic.

How about working among all those ski bums?

I had this preconception that ski instructors would be great athletes who loved to ski, but who’d have relatively low level of education… couldn’t have been more wrong! Most ski instructors at Vail have a college degree and lots have masters; for example, this was my group for my second day of training: Mik, a retired surgeon and now an investor who moved to Vail, instructs part time and donates 100% of that income to the Wounded Warrior project. Michael, an architect who designs local homes and businesses (also a part timer). Steve, an economist from the University of Chicago who decided a desk job wasn’t for him and now is happy working as a server at a high end restaurant and teaches part time. And my now great friend Rebecca, a Nuclear Engineer who worked on aircraft carriers for a few years, and is now off to get her MBA.

And then, there’s the friendships…  at the start of the season I had zero friends living in Argentina, now I have at least 20 from Buenos Aires, Córdoba, Mendoza, Ushuaya, Rosario, Neuquén, and whatever the name of Maru’s town is.

I’ve made some friendships that I think will continue forever like Rebecca and (in no particular order): Ian, my first roommate and friend, who’s so into living life, and who made me reflect on conserving resources and that we don’t need a lot of material stuff to be happy. He used to eat red meat only once a week, citing that the land used by cattle would not be sufficient if all humans would want to eat meat every day. Chris, a Chemistry major who seems quite contempt to be a ski instructor and camp counselor for kids in the next few years; Jeff, taking some time between his masters in Accounting and his job at a firm in Denver. Valerie, a Jersey girl and Political Science major who just spent two years teaching in Spain (and I wouldn’t be surprised if she goes back for two more). Mark, architect from Oxford (or was it Cambridge? he’s gonna kill me!) who just graduated and maybe was just killing some time until he looks old enough to be an architect. Omar, who’s supposed to be 18 but acts like he’s 36, he’s on his way to University of Chicago.

It’s kinda stupid to write about just a few because I’ve made so many friends, and even more stupid to write a sentence on each when I could write a book, but this is a blog post and we wanna keep it short and fun. 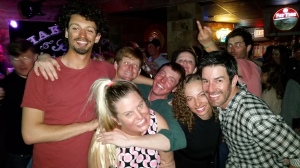 So, in conclusion, I can’t say what specific thing made this experience so great. Would I do it again? Probably not next year, maybe when I retire, like Mik. For now, I feel like I’ll find something where I’ll make a bigger impact, somewhere outside of the bubble, or maybe I can try to bring the bubble to many others. Could we all live in one big bubble?

(Having fun with old friends… thanks to all that visited during the season, it made it even more special!) 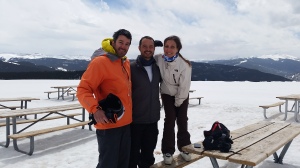 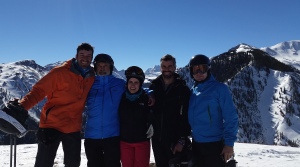 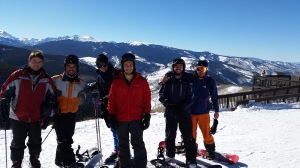 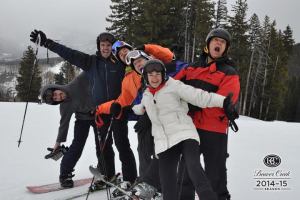 Let’s see how this blogging thing works out…

One year ago I asked my business partner of 12 years for a short meeting; trembling and with watery eyes I stepped into his smallish office, well within view of our staff through the glass “wall”, a symbol of the transparency preached in our company way before we took over management. I can’t think of another instance where I was afraid to share something with Luis, the #1 person I’d pick in a trust contest, the #1 guy I would pick as my brother in arms to go to war with.

“I’ve been reflecting on my life for the past months, I think I might want to make a big change in my life’s path. I’d like to leave my post as GM of Promotores Unity, maybe temporarily, maybe permanently”.  Tears, hugs, a little rage, a lot of compassion and understanding, then some of the stages of grief. Next, telling my other partners, more understanding and a feeling of “it’ll al be OK”, and friendship, thank you Emmett and Tito!

The transition lasted 7 months, with countless memorable interactions with clients, insurers, friends, family and even my competition, wishing me well and praising my work.  But certainly the most special moments were those with my staff, my teammates!, expressing sentiments of love and respect, and a little fear things might not work out.  No disrespect to them, I think I know that team better than they know themselves, I was confident this decision wouldn’t slow us down, and so far, they’ve proven me right.

Throughout those seven months, the recurring question was “why are you doing this?” with the underlying question being “what do I want to do with my life?”

Read Some of My Other Posts